Coronavirus ‘will hasten the decline of cash’ 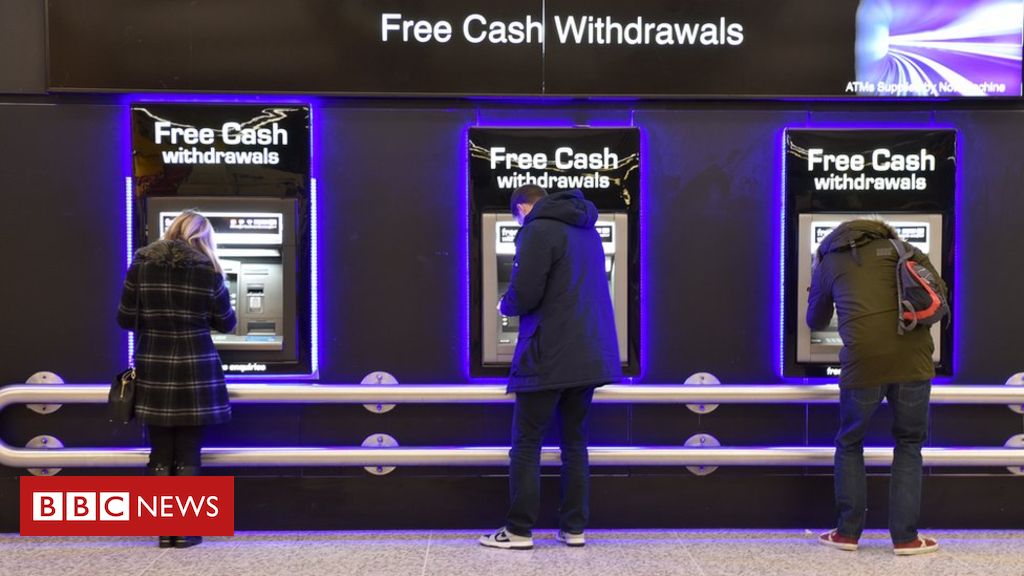 Coronavirus will hasten the decline in the use of cash as people make a long-term switch to digital payments, experts say.

The lockdown has led to a 60% fall in the number of withdrawals from cash machines, although people are taking out bigger sums.

Payment card use has risen with online shopping, particularly for groceries.

Experts say the long-term future of cash could be at risk, before the UK is ready to cope with the change.

This could leave behind an estimated 20% of the population who rely on cash, they say.

About 11 million cash withdrawals are still being made each week, with £1bn taken out, according to Link, which oversees the UK’s cash machine network.

Yet, with many shops as well as bars, cafes and restaurants closed, there is less demand for regular cash withdrawals. People are going out less, but potentially hoarding more cash.

The average ATM withdrawal has risen from £65 last year, to £82 now.

‘We can process cash in a couple of seconds’

Established more than 100 years ago, Webb’s Ironmongery Store has seen locals through many a crisis.

In the current emergency the hardware shop at Tenterden, Kent, is serving items such as garden and home equipment, and paint, from a counter set up in the doorway of the shop.

In order to ensure customers do not have to wait, given social distancing, it has put a sign up pointing out that cash is still accepted.

“We are trying to serve as many people as possible, so they can get it done and we can send them on their way,” said co-owner Nigel Webb.

“We take cards, but they may have to wait for the machine. We can process cash in a couple of seconds.”

Following a survey of consumers, Link suggested that 75% of people were using less cash, and 54% of those asked said they were avoiding cash.

There were reports early in the coronavirus outbreak about the spread of the virus on banknotes and coins. However, the Bank of England and World Health Organization have stressed that the risk is no greater than on any other items, and repeated the advice on regular hand washing.

Some 76% of people asked in the survey said they expected to use cash less and move instead to other forms of payment, or online shopping more in the next six months.

Natalie Ceeney, who authored a major report on access to cash, said that an estimated 30% of UK residents liked having cash as an option but, as a result of lockdown, may now be comfortable using other methods of payment. She described this as a “sticky habit”, which they could stay with in the future.

With 50% of the population already operating predominantly cashless, that left only 20% who relied on notes and coins, many of whom were vulnerable.

Will this be seen in future years as the crisis which finally ended our love affair with cash? Many shoppers are suspicious of handling it, worried about anything another person might have touched.

Traders who used to wince if you showed them your plastic are happily bringing out their card readers from the back of the stall. These findings do also show that in uncertain times some cling to their notes and coins even more tightly.

And they may be struggling to get hold of cash because they can’t leave their homes. But right now there seems little doubt the virus is speeding up the switch to electronic payments.