While You Were Offline: Devin Nunes Has a Cow (Kinda) 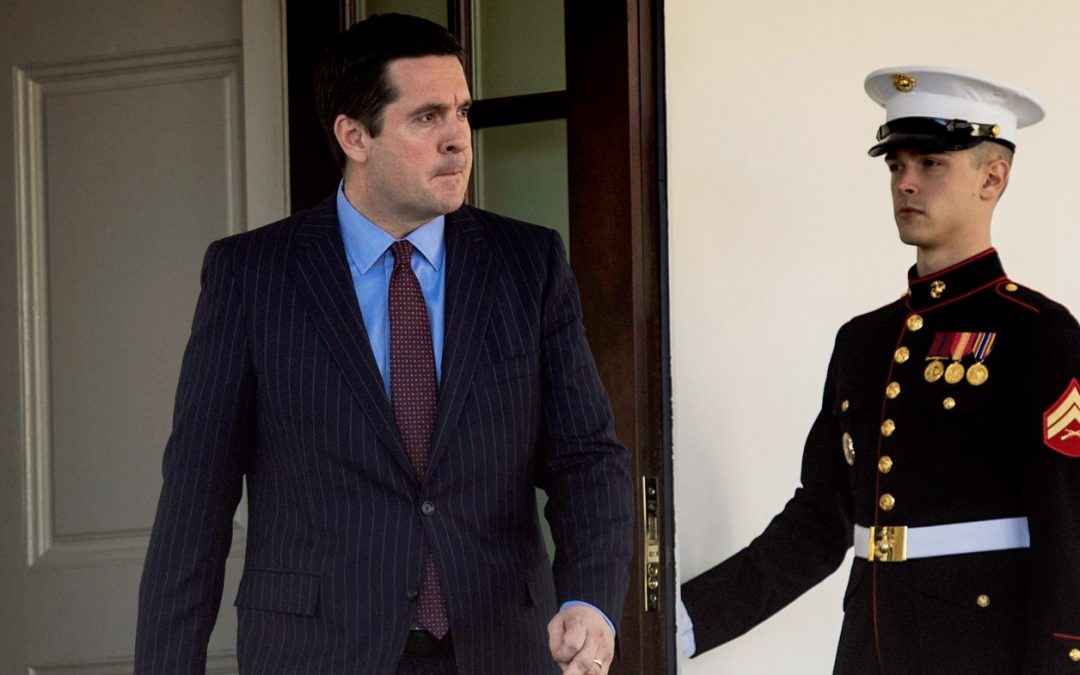 Good day, readers! Ready to dive into what happened online last week? It was a doozy, and not just because New York Rep. Alexandria Ocasio-Cortez and Hillary Clinton dunked on Jared Kushner and his use of WhatsApp for government business. Outside of Washington, it was a week where New Zealand managed to do what the United States has not and moved to ban assault weapons just days after a mass shooting. It was also a week where Disney finalized its purchase of huge chunks of 21st Century Fox, bringing the first of potentially many layoffs. Oh, and as with many weeks prior, nearly everyone wondered where Special Counsel Robert Mueller's report was. (They finally got their answer late Friday.) You're not alone if you're thinking that's already a lot. But there was so much more. Let's get started.

What Happened: Last week saw the return of a political figure who is beloved by some, and very much not beloved by others. Ladies and gentlemen, please welcome back Devin Nunes' Cow.

What Really Happened: The week started, as these weeks do now, with a story that feels like it would have been rejected from a comedy show two years ago for being too unrealistic. So, remember Devin Nunes? Sure you do. He's the Republican congressman from California who was formerly in charge of the House Intelligence Committee and who was himself under investigation for potentially sharing classified info. He also worked with the White House to exonerate the White House while withholding information from Democratic lawmakers. Oh, and he is the author of the infamous Nunes Memo. Yes, that guy. Well, he's back in the news for the dumbest of reasons.

No, that's not a joke. Well, not an intentional one. Nunes is indeed suing Twitter—and some Twitter users, to boot—over parody accounts.

The lawsuit was, as should only be expected, an immediate target for comedy on Twitter.

Indeed, by the end of the week, the meteoric rise of the @DevinsCow account had become the actual story, more than the lawsuit itself. Which, to be fair, seems somewhat fitting.

The Takeaway: If nothing else, perhaps everyone can agree that the lawsuit does finally determine whether or not Devin Nunes should be taken seriously.

What Really Happened: Finally, after all manner of hand-wringing, the bombshell report finally dropped.

OK, that tweet doesn't make the report sound like much of a big deal at all. But trust that it is. It's far too early to speculate as to what this report really means, or whether or not the American people will ever see its full findings, but Barr was—as of this writing—signaling that he hopes to make as much of it public as possible.

Speaking of, there were two notable things about Barr's letter:

While everyone waits for the next development on that front, there's something more pressing to deal with: The Twitter jokes. Take it away, social media mavens!

Hm, wonder what politicians are doing about this …?

Of course, by the time you read this, that'll almost certainly not be the case. Watch his Twitter, everyone. But, as the news made its way around the internet on Friday, there was just one question: What next? The answer: Just wait.

The Takeaway: Leave it to Dan Rather to be the voice of reason. Or maybe buzzkill? It is admittedly hard to tell.

Tweets Do Not Equal Endorsements, Except When It Comes to US Foreign Policy

What Happened: For everyone who joked about President Trump making significant foreign policy announcements on Twitter once he took office, the joke's on you. Well, it's on everyone, actually.

What Really Happened: On Thursday morning, the president took to Twitter to broadcast some foreign policy. Because, you know, we do those things via Twitter now. (Somewhere, Jack is very pleased.)

This was news because although Israel captured the region in 1967 and annexed it in 1981, it has been considered occupied territory by the international community for the past three-plus decades.

If you want another reason why this is new, there's also this.

Whatever the reason, people were talking about Trump's tweet and what it might mean in real terms. So, what exactly was going on here? Some people had some theories, unsurprisingly.

That's not a joke about the indictments, by the way; Israeli Prime Minister Benjamin Netanyahu is currently facing corruption charges from three separate investigations.

As Syria condemned Trump's position—perhaps the least surprising element of all of this—others began wondering if folks were jumping to conclusions too quickly. After all, is anyone really sure if this is Trump actually announcing new foreign policy or just riffing? Can he even do that? It was at best somewhat unclear.

The Takeaway: Well, at least someone is happy.

What Happened: What is the best way for a president to regain strength amongst his supporters? Everyone who said "Start a fight with a dead man," you’re right.

What Really Happened: When not making friends abroad, President Trump was making enemies back home last week. First, he started publicly attacking Kellyanne Conway's husband (who, to be fair, is fighting back just as hard). Then, in what was one of the more unexpected political moves of the week, Trump reignited his feud with none other than the late John McCain. It all started with this unexpected tweet last Sunday:

And neither was anyone who cared about … you know, facts.

The tweet got people thinking about the contrast between the two figures once again.

As if the president's weekend tweets weren't enough, he came back for more later in the week.

And, genuinely shockingly, he returned for a third attack not too long after that.

Please note that the funeral comments also didn't actually have much to do with reality.

You know what they say: Attacking a dead man multiple times over the course of a week is the only way to truly demonstrate … uh … something? Dunno.

The Takeaway: If nothing else, perhaps it's time to reflect on the fact that Trump is highly focused on a man for whom he was barely a footnote in an otherwise long, often distinguished, career.

If Anyone Knows Economics, It's Bruce Wayne and … John Cleese?

What Happened: It's said that only the best people work at the White House, that's not a joke. Apparently, the administration is even employing superheroes—and, bizarrely, Jabba the Hutt—in its economic office.

What Really Happened: Let's turn our attentions to a more frivolous matter for a second. Like, say, this year's Economic Report of the President, from the Council of Economic Advisers. People get super psyched about this kind of stuff!

And, yes, that's definitely what it was about the report that got everyone talking this week. It certainly wasn't the crazy list of interns at the end or anything.

For what it's worth, the CEA decided to pretend that all of this was intentional.

If you're as unconvinced by that excuse as many others were, here's some food for thought: The same thing happened last year.

The Takeaway: A mistake or a joke that no one actually took in the manner it was intended? We may never know (but chances are, it's somewhere between the two; a joke that slipped through vetting a couple of years in a row), but if there's one thing everyone could learn from the kerfuffle, it's this:

It's the Final Countdown (Unless There's an Extension)

What Happened: As the United Kingdom hurtles towards Brexit, the level of chaos and confusion that has marked the end of its relationship with the European Union stepped up a couple of notches. Forget good deal, bad deal, or no deal, everything has reached a point of "What even is the deal?"

What Really Happened: So, here's where all things Brexit were at the start of the week: The UK Parliament had voted to extend Article 50, meaning that Brexit—currently still scheduled for March 29—would be delayed until some later point. Prime Minister Theresa May asked for a delay through June 30, and European Union President Donald Tusk agreed … kind of. But there was a twist.

Then there was another twist. Tusk only actually agreed to delay until May 22, not June 30. But that kind of detail would be meaningless if the UK Parliament didn't pass May's deal, preferably as soon as possible. With nothing less than the fate of the United Kingdom on the line and Brexit nine days away, May announced a meeting of the leaders of all British political parties Wednesday night to discuss just what was about to happen. Let's just say that things didn't go well.

Not the best look for the Labour Party leader, really.

But not to worry; if the Labour leader wasn't too impressive in dire straits, Theresa May was ready to prove that no one can compare when it comes to own goals. After the meeting, she gave a statement that was much anticipated, with many expecting it to offer some element of olive branch to those in Parliament, and especially her own Conservative Party, in an attempt to get them to please, please, vote for the damn deal. That wasn't actually the speech she gave.

How bad was it? Everyone agreed, pretty bad might be an understatement.

It was also, arguably, dangerous in its positioning.

Remember, violence against MPs isn't a new thing, nor a trivial matter, in the United Kingdom, as everyone who remembers Jo Cox would tell you. As May went to Europe to try unsuccessfully to argue her case—

—an online petition started being widely shared across social media to try and counteract what was happening in a last-ditch attempt.

Late on Thursday, the European Union laid out new terms for the next three weeks—

—but, as is now traditional, the British government seemed to have its own agenda altogether, as was clear Friday.

So, where will the UK be this time next week? Your guess is as good as anybody's at this point, but there's a reasonably good chance that the answer involves still being part of Europe for a little while longer. At least there's a flow chart to make sense of it all.

The Takeaway: Honestly, if there is a takeaway to be found here, it's that nobody knows anything for sure about Brexit anymore.