Stormont given 31m to prepare for no-deal Brexit 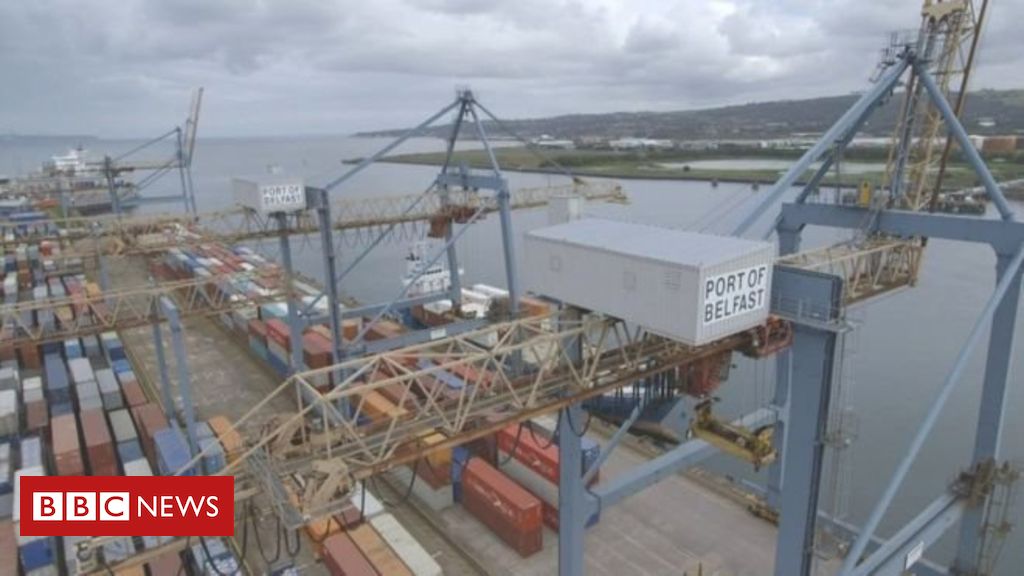 Northern Ireland’s Department of Finance was given £31.4m during the summer to help Stormont departments prepare for a no-deal Brexit.

The Treasury allocated the money from a pot of £2.1bn, announced on 1 August for no-deal preparations across the UK.

Stormont’s share was confirmed to SDLP deputy leader Nichola Mallon when she asked for a breakdown of the figures.

She expressed concern that a “huge sum” had been allocated by civil servants without input from MLAs.

Ms Mallon told BBC News NI the money would have been better spent on employing more nurses and building more housing and she accused Prime Minister Boris Johnson of “reckless and dangerous” tactics on Brexit.

She added that the spending plans “threw up significant questions” about the government’s plan for borders if there is no deal with the EU.

Where is the money going if there is no deal?

More than a quarter – £8m – of Stormont’s extra £31m has been set aside for capital spending on roads and port infrastructure.

Almost £6m of it has been allocated to the Department of Agriculture, Environment and Rural Affairs (DAERA) for “trade, inspection, legislation and policy staffing”.

A further £3m has been allocated for capital spending on “vehicle parks” in Northern Ireland although there are no details about locations.

New signage, CCTV and “communication equipment” will cost £2.3m, according to the figures.

The majority of the cash has been split between two departments – DAERA and the Department for Infrastructure.

The Department of Finance initially planned to hold back £2m in reserve to deal with what it called “emerging pressures”.

The public transport company Translink has been allocated £600,000 for cross-border contingency planning while Northern Ireland Water, which manages the water and sewerage infrastructure, is in line for £2.2m for “maximising chemical stock levels”.

However, almost half of that £2m – £800,000 – has since been allocated to the Department of Health to cope with potential “medicines shortage and medical device shortage”.

The most intriguing items in these budget documents are the capital spending commitments for roads, vehicle parks and CCTV.

That is exactly the sort of infrastructure the government says it won’t be building at the border, even if there is no deal.

So perhaps it’s money that will be directed towards the Irish Sea ports.

The Scottish government also has a no-deal contingency plan to “repurpose” land at the old port of Stranraer as a lorry park.

It says that may be necessary if there are increased traffic flows between Northern Ireland and Scotland.

One reason for these increased flows could be the government’s zero-tariff no-deal plan for the Irish border.

They may provide an opportunity for Irish traders to trade tariff-free through Northern Ireland and onwards to Scotland, whereas product leaving Dublin for Holyhead in Wales would face tariffs.

Who makes the decisions on how the money is allocated?

Stormont’s no-deal spending plan was released by Sue Gray, the most senior civil servant in the Department of Finance, in response to a request from the SDLP deputy leader.

In a series of written questions to the Northern Ireland Civil Service, the SDLP’s Ms Mallon had asked: “Who took the decision and under what authority to allocate this funding?”

Ms Gray replied: “I took the decision, acting under the Northern Ireland (Executive Formation and Exercise of Functions) Act 2018, to allocate this funding.”

That legislation was passed by MPs at Westminster in order to keep Northern Ireland’s public services running in the absence of locally-elected ministers.

Why is a civil servant making decisions on public spending?

The Northern Ireland Assembly and its governing executive have not functioned for almost three years.

The power-sharing executive collapsed in January 2017 when relations between its two biggest parties – the Democratic Unionist Party (DUP) and Sinn Féin – broke down.

Why has the SDLP raised concerns about the spending plan?

Ms Mallon, whose party is opposed to Brexit, said £31.4m was a “huge sum of public money” and its allocation had been “decided on without an executive”.

“There is no scrutiny or accountability and despite requesting it, no explanation or rationale has been provided for these decisions,” she added.

She said the money could have been used instead to fund about over 1,300 new nurses or build more than 240 homes.

She explained the average cost to build new social housing in Northern Ireland was £130,000 per home, while the average salary for a registered nurse in Belfast was just under £24,000.

Ms Mallon questioned the large amount of money allocated for CCTV in the event of no-deal.

She asked: “Does any of this involve border infrastructure? We need the detail behind these headlines.”

The SDLP MLA said she had asked for the thinking behind the allocation of the money to be explained to her but that further detail had yet to be presented.