Would the Greta generation play with these toys? 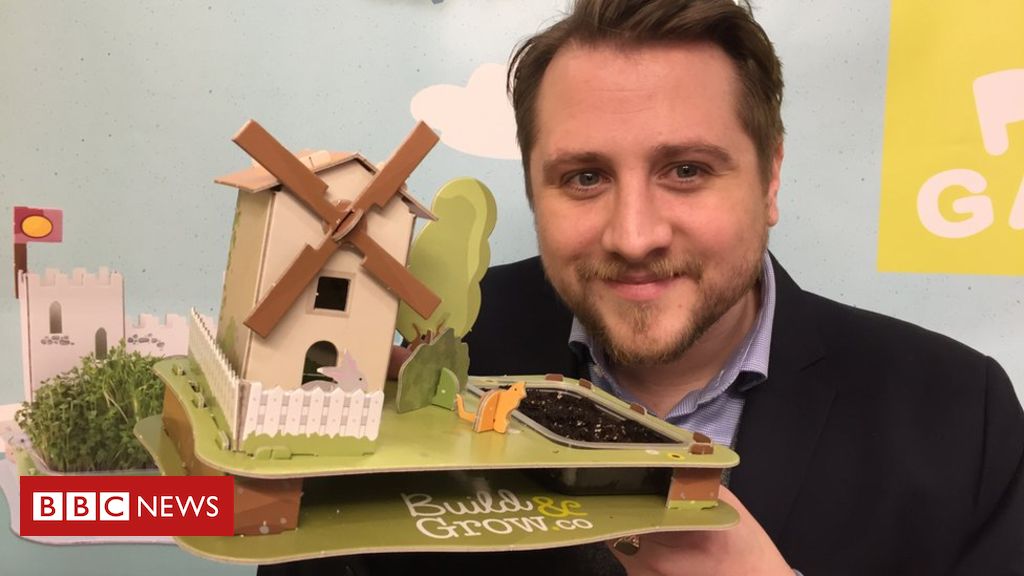 Choose one word to describe toy trends in recent years and it would be “collectable”.

Every box and packet, from pocket money mini-figures to expensive construction sets, has been urging children and their parents to complete the set. In other words, buy more and more.

Now that craze to pile up the plastic seems to have peaked, and there is a new word on toy-sellers’ lips – sustainability.

They’re responding to a generation of children who have gone on school strikes, following the lead of teenage campaigner Greta Thunberg, and are turning on their parents for failing to protect the planet.

What was clear from the Toy Fair, the annual jamboree in London’s Olympia which was held last week, is that small toymakers are leading the way.

University project made a business

Dan Robson came up with the idea of a 3D puzzle garden, while studying design at Northumbria University. The eco-friendly models scenes – such as a windmill or a volcano – are assembled from pop-out boards. Children then plant seeds to grow cress, pea, kale, rocket, lettuce or watercress in the little container of earth.

“Our aim is to encourage children to grow their own, while educating them on how to grow and why it’s important,” says 32-years-old Mr Robson, who runs his Build and Grow business from in Blaydon, near Gateshead.

He considered what materials to use very carefully. The £15 play sets and packaging are made from recycled card and are printed using vegetable ink. The plastic container is recyclable, and even the soil is locally sourced.

Parents and children, he says, not only want a fun toy, but a responsible one too.

“People are very aware now of their impact on the environment and this is driving a change in consumer habits,” he says.

Eyes on the planet

Such eco-innovation is not unique at the Toy Fair. On a nearby stall is another small business – Paper Engine – which has created build-your-own gadgets such as a telescope, a microscope, and a paper aeroplane launcher.

The business is a spin-off from the designers of pop-up books, which has now moved into the crowded creative toy sector.

The selling point is clear. Apart from the lens, the telescope is made entirely from paper and card.

The cardboard box in which it is delivered is self-contained and free from shrink wrap. The only issue that tests its environmental credentials is that, in order to keep costs down, the printing is done in China.

While the backlash against plastic packaging of toys has been vociferous for some time, the actual products themselves are now increasingly under the microscope.

“We’ve been talking about sustainability for 10 years. It is not new. We’ve moved on but we are still not perfect,” says Natasha Crookes, from the British Toy and Hobby Association.

The association, which represents manufacturers, has been working hard to make toys more durable, she says, allowing toys to be handed on to friends and family as children grow out of them.

Some 80% of parents donate used toys, she says, and the association tracks marine litter to ensure toys are not continually washed up. The results, she says, are encouraging. Buckets and spades and other litter left by families visiting the seaside are more of a problem than dumped plastic toys, she says.

Yet, gifts in children’s stockings and presents under the Christmas tree last month were still primarily plastic, much of which ultimately ends up in landfill after a toy loses is lustre?

Parents are cutting back. Consumer awareness is driven by the children themselves, says Ms Crookes.

However, many manufacturers face regulatory problems if they try to go further, broadly for two reasons.

The first are the strict controls on the chemical content of toys. Regulations are tight on what a toy can be made of, to ensure it does not harm the children who play with it.

Put simply, manufacturers cannot use any old recycled plastic if they do not know exactly what is in it. So the recycled material needs to be clearly and cleanly sourced.

Secondly, in order to recycle toys efficiently just like any other product, they would need to be easily pulled apart. Again, this goes against regulations. Toy safety rules state toys, particularly for young children, should not be easily dismantled and become a choking hazard.

These are hurdles for big manufacturers, but they are not impossible to clear.

Italian-based toymaker Clementoni has a range supplying children from birth to 12 and over, and is making a statement.

It is aiming for its infant range to come from recycled plastic, certified and manufactured on site in Recanati. A range of puzzles, including packaging, made from recyclable materials has also been designed and will go on sale from March.

“We are making an offer to the conscious consumer,” says UK country manager Shahbaz Khan. “But we accept it is only a first step.”