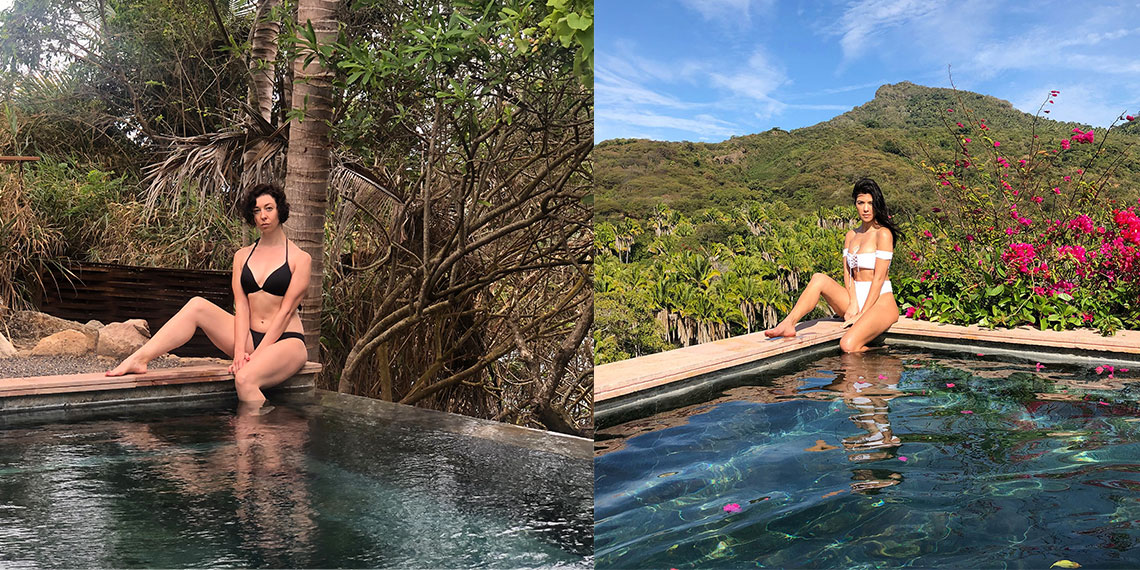 Last month, I planned a solo trip to Puna de Mita, an under-the-radar (but not for long!) beach town on Mexico’s Pacific Coast. Shortly after I’d booked a casita at Imanta Resorts, I learned that Kourtney Kardashian visited the very same 12-villa resort in 2018, and she shared loads of photos from her vacation on her lifestyle blog, Poosh (best known for unseating Goop for the title of “least appealing onomatopoeia-slash-website-name”). I was already stoked about the destination: Just north of Puerto Vallarta in Riviera Nayarit, Imanta is a secluded, 250-acre patchwork of powdery beaches, lush green mountains, and peace and quiet. (There’s even an outdoor spa.) All the villas have private terraces and plunge pools, and looking over Kourtney K’s photos, I came to see she took full advantage of the photo opps.

I don’t love taking (or viewing) photos of myself; I get awkward in front of a camera and usually give up on selfies after a couple stupid shots in which I don’t look how I think I do. My eyes go right to the flaws in full-body shots, and while I have loads of confidence in my intelligence, charm, ambition, and professional prowess (I’m a travel writer and novelist whose second thriller, THE HERD, set in an all-female coworking space, coming out this month), when it comes to my looks I can be a bit more self-effacing than vain. (And yes, I’m a fair-skinned woman with a below-average BMI so I’d like me to STFU, too.)

But these photos of Kourtney—they cracked me up. There was something cartoonish about the angles: legs flung about, butt thrust out like a baboon in heat. So I decided to replicate them, sans Photoshop, armed with nothing but my self-timer and iPhone tripod. It was one of the most ridiculous afternoons of my life, and the thought that kept running through my head was, “I really wish I were drinking something boozy on the beach right now instead of doing this.” But by the end, I was actually into it. Without further ado, here are the money shots.

What’s incredible is that none of these poses were remotely natural or comfortable. Not one. Like, your hands just don’t go there when you’re sitting on the corner of a pool, and anyway, when do I ever sit on the corner of a pool in this manner? I smized at my iPhone across my villa’s pool while tightening my abs and squashing my hands awkwardly in front of my crotch, which pushed up my boobs but also distorted my upper-arm muscles. And I would NEVER think to do this with my legs for a photo, in part because it was extremely uncomfortable and I thought I might fall into the water. Honestly, I’m not as tiny as Kourtney, but I think I look kind of hot. (And no, I’m not objectifying myself by showing you me in a bikini, since it’s my call. Here, read this explainer from Everyday Feminism.)

Kourtney got this shot in front of the resort’s public lounge, the Observatorio Bar, but I did my best to recreate it in my villa because I do, believe it or not, have a modicum of dignity. This photo was my white whale, and not just because it’s really really hard to not look bulbous whilst balancing awkwardly on not one but two very high bar stools. (Plus, my #TacoTally was at 22 at this point; I’d been keeping track on my Instagram Stories because this is the kind of Quality Content™ my followers expect). You can see the look of panic in my eyes by this point, dozens of attempts in. Also, how do Kourtney’s legs never have the appearance of separate tensed muscles when holding such poses requires the control, balance, and clenched quads of a Cirque du Soleil performer? #deepthoughts

I want you all to know that I was deep into capturing this photo when I heard a knock on the patio door just outside the frame and two housekeepers waved and asked if they could take away the half-drunk bottle of wine I’d left out from the night before. I was flexing hard, and my iPhone tripod was precariously perched on top of a stool on top of a side table. OH HAI.

Anyway, no one looks good in this pose. Kourtney’s whole lewk likely cost more than my four-year education at a private university, and SHE doesn’t even look that good in this pose. I, however, was blessed with my mother’s booty, which is the opposite of gravity-defying; as a kid her friends deemed it a “slug-butt.” (Apparently in the halcyon days before the internet children were just super mean to your face, so good thing Melania solved cyber bullying last year). To get this, I had to arch my back but then tuck my pelvis so the focus would be on my butt and not the inevitable skin fold just above my waist. Kourtney, why. Whywhywhywhywhy.

I went on Kourtney’s guided jungle hike with some strangers and asked Keith, one such new friend, to take photos of me from behind as I walked. Because he’s a normal human with functional eyeballs, whenever we got to a pretty vista he’d be like, “Do you want me to take a photo of you here? Like, smiling and not facing away?” And I said yes and those photos turned out much better than this ass shot. I also didn’t notice until after that here Kourtney is hinging hard at the waist like a flopped-over Barbie, which wasn’t mechanically necessary for the gentle incline but does make her butt appear larger and her torso tinier thanks to the magic of perspective. I’m taking notes.

Also, special shoutout to Alex, the hiking guide Kourtney and I both had, who found a capsule collection that works for him and sticks to it.

Dunno why we needed this one when we had that perfectly good other one of the same pool but, ‘kay. For this photo I had to drag the extremely heavy cement side table over to the corner of the pool and I smashed a toe in the process (the things I do for my art). I never did quite figure out how her back is so straight and yet her elbow is on her knee but then her hand is back behind her head. And I have long spider limbs. Also if I didn’t have that back arm out behind me I legit would have toppled into the pool, so yet again, mad respect to Kween Kourtney.

I made the poor waiter take this for me, and I was glad to see that KK had just as much trouble with the backlighting as I did. Let the records show that the guacamole, four kinds of chips, additional basket of chips, cactus salad, and passion fruit margarita (not pictured) were just Course One of a lunch that slid right into lobster tacos. (The food at Tzamaika Ocean Grill is GOOD.)

During my solo photo shoot, I couldn’t stop rolling my eyes—I was awfully eager to get the shot and go order some tacos. But going through the photos later and thinking thoughts like, “Damn, those tits don’t quit”, I had to admit that being vain is pretty fun. (I’m from the Midwest, where they take you out and pelt you with stones, Shirley Jackson-style, if you accept a compliment without fervent deflection, so this was, indeed, a revelation.) I didn’t feel like a Kardashian, because to me there always seems to be a sheen of insecurity under the poses and angles and blue steel smize. Instead, I felt like I was channeling Lizzo, Beyoncé, J.Lo—hot AF women who seem to adore their bodies not just for how they look, but for how they can feel…i.e., good as hell.

Imanta is private and calm, a screensaver-esque loop of birds flying and waves crashing and palm trees swaying in the breeze. For a few days, the only words I read were on my Kindle or the drink menu. When I started the journey back to New York City, I was bombarded by ads: huge words and images telling me I’m not thin, beautiful, rich, sexy, or cool enough as-is. I won’t ever stage a photo shoot like this again, but will I channel the same hot-bitch vibes? Absolutely.